May 2nd marked the last day for polls to be conducted before the South Korean presidential election on May 9th. With only four days remaining until the election and early voting already over, the odds are looking increasingly favorable for frontrunner Moon Jae-in despite a recent surge in the polls from conservative candidate Hong Joon-pyo. Moon maintains a 20 percent lead over his closest rival Ahn Cheol-soo of the People’s Party, who has fallen in the polls nearly congruently with Hong’s rise.

Although Ahn and Hong’s poll numbers have shifted dramatically in recent weeks, Moon has enjoyed relatively stable support. From our first poll of polls the week of April 11-17, Moon’s numbers have only decreased by 1.4 percent. 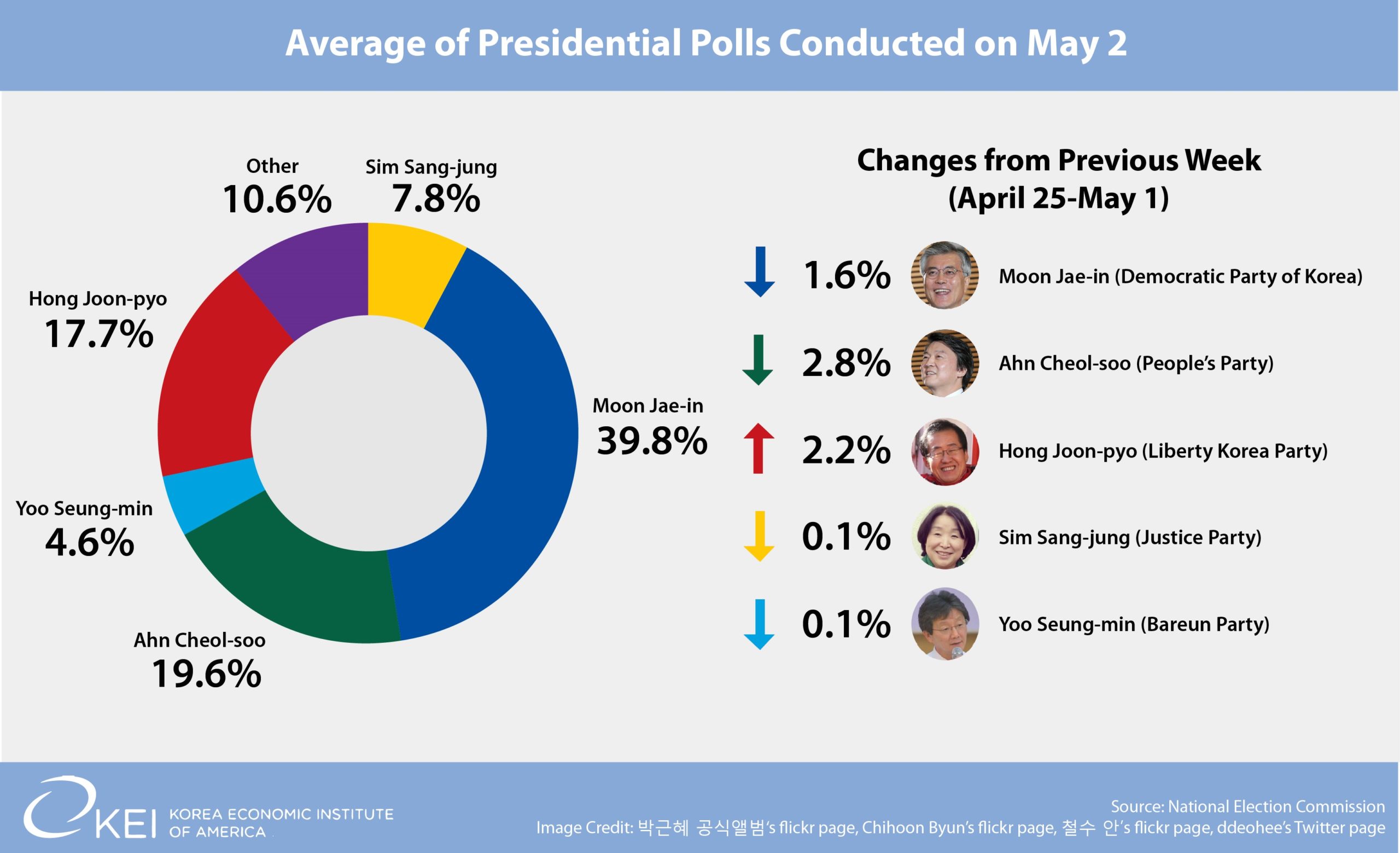 A strong early voting turnout also works against Moon’s rivals. The National Election Commission reported that 26 percent of voters have already cast their ballots after early voting ended earlier today. In comparison, 12 percent of voters turned out for early voting in last year’s parliamentary elections. Of interesting note, the typically liberal Jeolla provinces had some of the highest early turnout, while the conservative Gyeongsang provinces experienced some of the lowest.

With little time remaining, it is difficult to see a scenario where any of the other remaining candidates could stage an upset again Moon. Either Hong or Ahn would have to decisively win over moderate and conservative voters over the weekend. Politics can be notoriously unpredictable, but that has not stopped some from calling the election early. The May 15th issue of the Asian edition of TIME magazine features Moon on the cover, and it is only a matter of days to see if he indeed does become South Korea’s next president.

The polls included in our aggregate poll are from listings on the South Korean National Election Commission’s website. The aggregate poll includes any polls conducted on May 2nd. For more information, you can visit this page and see the polling data (in Korean) from each research organization. Our aggregate poll includes polls conducted by Realmeter, Gallup Korea, ResearchView, Research & Research, Hankook Research, Jown C&I, MetriX, Kantar, Embrain, and Yeouido. Last week’s poll of polls was updated with polling information from the week of April 25-May 1 that has been released since the prior blog was published. The updated numbers for last week’s polling results are as follows: Moon Jae-in (41.4), Ahn Cheol-soo (22.4), Hong Joon-pyo (15.5), Sim Sang-jung (7.9), and Yoo Seung-min (4.7).