Meet the Four Korean American Members of the 117th Congress Much like the Korean American community as a whole, the four new Members of Congress come from diverse backgrounds and experiences, and they represent a wide range of political views. Yet in spite of their differences, common themes that cut across each of the Members’ backgrounds are their immigrant histories and commitment to public service.

Read more about the four Korean American Members of the 117th Congress: 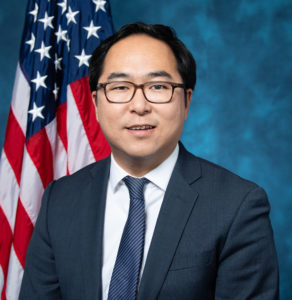 Andy Kim grew up in South Jersey and spent his entire career in public service. In 2018, he narrowly won a swing district, becoming one of the few Democrats over the past century to hold the seat. Prior to serving as Congressman, he worked as a State Department advisor and later at the National Security Council under President Obama. In his re-election campaign, he is focusing on affordable healthcare, veterans issues, and supporting small businesses. A proud son of Korean immigrants, Andy Kim remains optimistic about what the Korean American community will achieve. Young Kim’s bid for Congress has been two decades in the making. Kim started her public service as Director of Community Relations and Asian Affairs for former Congressman Ed Royce (CA-39), where she was a key liaison to  39th District and advisor on issues pertaining to the Asian-American community and foreign policy. She is a first-generation Korean American who became the first Korean American Republican woman elected to California’s Assembly. In the Assembly, Kim worked to to grow jobs, support small businesses, ensure public safety, promote educational opportunities, support veterans, and protect victims of domestic violence. Before her time in office, she worked in finance and started her own small business in the women’s clothing industry. Born in South Korea, Michelle Park Steel is an American government official. After moving to the U.S., she continued her studies and became active in Republican Party politics. She is currently Chairman of the Orange County Board of Supervisors. Previously, she was elected to the California State Board of Equalization and served on various commissions in the George W. Bush administration. Her campaign platforms revolve around lowering taxes and securing the border. As an immigrant, Michelle Park Steel shares how she has been fortunate to live the American Dream. Strickland’s father, who fought in World War II and Korea, met her mother while he was stationed in Korea after the war. Strickland’s parents endured discrimination and hardships that she could never imagine. They wanted her to have opportunities they were denied and taught her to work hard, fight for what’s right, serve the community, and to stand up for the underdog. Those values continue to inspire Congresswoman Strickland every day as she advocates for Washington’s 10th Congressional District in Congress.

Prior to Strickland’s election to Congress, she served as Mayor of Tacoma, where she helped transform a city and economy crippled by a deep recession into a destination for families, workers, artists, tourists and entrepreneurs. In addition to attracting over $1 billion in investment for housing and businesses, she was instrumental in investing over $500 million in infrastructure for roads, bridges, transportation, and the Port, creating over 40,000 new jobs in the Tacoma region.

Strickland serves as a Member of the House Committee on Transportation and Infrastructure in addition to the House Committee on Foreign Affairs. She is also a Member of the Congressional Black Caucus (CBC), the Congressional Asian Pacific American Caucus (CAPAC), the Bipartisan Historically Black Colleges and Universities (HBCU) Caucus, Democratic Women’s Caucus, and the New Democrat Coalition.

Sonia Kim was previously an intern at the Korea Economic Institute of America and is a recent graduate from Harvard College with a degree in Government and East Asian Studies. The views expressed here are the author’s alone.

Member photos from their official websites or official Facebook pages.

This post has been updated to reflect condensed versions of the Members’ official bios.