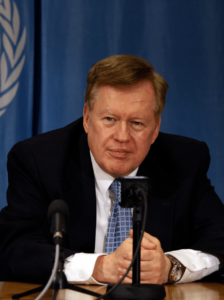 Ambassador Robert King is currently a Non-Resident Fellow at the Korea Economic Institute of America (KEI) and a Senior Advisor to the Korea Chair at the Center for Strategic and International Studies. Prior to joining KEI, he was the Special Envoy for North Korean Human Rights Issues following confirmation by the United States Senate in November 2009. Ambassador King worked as the leading U.S. official on human rights and humanitarian affairs for North Korea. Prior to his appointment, he worked on Capitol Hill for 25 years. He was concurrently Staff Director of the Foreign Affairs Committee of the U. S. House of Representatives (2007-2008), Democratic Staff Director of the Committee (2001-2007), and had held various professional staff positions on the Committee since 1993. He has authored five books and more than 40 articles on international relations. Ambassador King holds a Ph.D. in International Relations from the Fletcher School of Law and Diplomacy at Tufts University.

You’ve probably heard the Korean War referred to as an unfinished conflict – but that’s not just a reference to the frozen war on the Peninsula. The sudden outbreak of…

Should the international community suspend advocacy for human rights in favor of cooperation with odious regimes to fight the COVID-19 pandemic? This appears upon first glance like a trade-off, but…

On March 9, South Korean voters will select their next president for a five-year term.  The South Korean constitution limits presidents to a single term, so there is no incumbent in the race. The presidential campaign is a contest between Lee Jae-myung, candidate of the progressive Democratic Party of current president Moon Jae-in, and Yoon…

Heads of government of the world’s 20 largest economies met in Rome for their annual G20 economic summit last week.  The G20 member countries together account for more than 80% of the world GDP, 75% of global trade, and 60% of the world’s population.  Although the organization’s 2020 summit was held virtually because of the…

This is the second in a two part series looking at the entry of South and North Korea into the United Nations. The first part can be found here.  Since their admission to the UN, the two Koreas have played quite different roles in the organization.  In the thirty years since it became a UN…