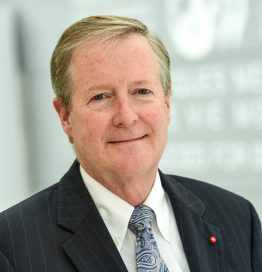 Dr. Randall Jones is a non-resident distinguished fellow at the Korea Economic Institute and a Professional Fellow at Columbia University’s Center on Japanese Economy and Business. Previously, he served as the Senior Counsellor for East Asia and as Head of the Japan/Korea Desk at the Organization for Economic Cooperation and Development (OECD) in Paris from 2002 until August 2019. During his 30 years at the OECD, Dr. Jones wrote all 16 OECD Economic Surveys of Korea and 15 OECD Economic Surveys of Japan, in addition to a number of other publications. In recognition for his work on Japan and Korea, Dr. Jones received the Decoration of the Order of the Rising Sun from the Government of Japan and the Sungnye Medal of the Order of Diplomatic Service Merit from the Government of Korea in 2018. Before joining the OECD in 1989, he spent three years in the U.S. government, serving at the Council of Economic Advisers and as an advisor in the State Department. Dr. Jones was also the vice-president of the Japan Economic Institute in Washington. Dr. Jones received a B.A. in Economics from Brigham Young University and a PhD in Economics from the University of Michigan in 1984. He lived in Korea from 1974 to 1976.

Korea’s Potential Growth Rate has Fallen to Around 2%

Korea's Economy Slowed in the Third Quarter, but Still on Track for 4.0% Growth in 2021

Korea’s real GDP increased 1.2% (saar) in 2021Q3, a significant slowdown from the first two quarters of the year, reflecting a decline in private consumption (table below). A tightening of social distancing measures since July, aimed at slowing a fourth wave of COVID-19 infections, reduced spending on “consumer-facing services”. For example, demand in the food…

North Korea’s real GDP fell by 4.5% in 2020, according to the estimate announced by the Bank of Korea (BoK) at the end of July (Figure 1). It was the steepest decline since 1997 during the “Arduous March,” when North Korea was hit by famine. The downturn last year was caused in part by measures to contain…

Korea is pursuing a bold strategy in an effort to achieve a paradigm shift that results in a fair economy. Some of its major initiatives – notably sharp increases in…

Reforming the Pension System in Korea

Korea is in the midst of the most rapid demographic transition of any member country of the Organization for Economic Cooperation and Development (OECD); the share of Korea’s population older…