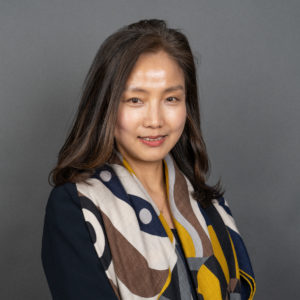 Hae Kyung “Haley” Ahn is Senior Advisor at the Korea Economic Institute (KEI). In this position, she provides advice and support in the development and execution of KEI programs and activities. Prior to joining KEI, Haley worked as Head of the Protocol Office at the U.S. Embassy, Seoul. Reporting directly to the U.S. Ambassador to the Republic of Korea, she was responsible for overseeing all protocol and programs; advising on Korean local customs; and monitoring diplomatic, political, and economic developments in Korea. Haley assisted many high-level U.S. government visitors, including the President of the United States, acting as a liaison between the delegations and the Republic of Korea government and other key business, academic, and cultural organizations in Korea. She also worked at the Embassy’s Public Affairs Office coordinating Visiting Speakers program and maintaining a comprehensive database of contacts from media, academics, and culture sectors. In addition to her professional experience of two decades working at the U.S. Embassy, Seoul, she served as advisor and lecturer at the International Convention Management Center at Ewha Womans University and adjunct professor at Soongeui Women’s College in Seoul, Korea.

Haley has received various awards from U.S. government including the Meritorious Honor Award and the Foreign Service National (FSN) of the Year Award. She has also received a Merit Award from the Republic of Korea Minister of National Defense in 2016.

This article was published on The Diplomat on August 4, 2022. One of South Korea’s biggest annual international conferences, the Asian Leadership Conference, was held in Seoul from July 13…

Why Is Hosting the 2030 World Expo So Important to South Korea?

This article was published on The Diplomat on September 12, 2022. The Statue of Liberty and the Eiffel Tower have something in common: They both were displayed at the Paris…

10 Issues to Watch for on the Korean Peninsula in 2023

The most significant event to impact the Korean Peninsula in 2022 was Russia’s invasion of Ukraine. As in much of the world, the war had the effect of furthering inflation, significantly driving up energy costs, and pushing South Korea into only its second trade deficit this century. Outside of the war’s economic implications, it has…